Being an influencer is a highly lucrative activity, but it's also a relatively new one, which gives those looking for an easy money-making opportunity a chance to do so. One of the ways people do this is by becoming "fake" influencers.

What is a fake influencer?

Great question! An influencer is generally defined as someone who creates a community around their social media presence and platforms. They have a following and a high enough reach to be able to influence their audience's opinions and perceptions.

Real influencers are content creators who've worked hard to find an audience and establish a presence people trust within their niche. While their success seemingly happened overnight, it's likely that it took a lot of time and effort to get to where they are today.

Being an influencer is much more than having a high number of followers.

While the basis for being an influencer is definitely the community around them that actively consumes their content, it would be a mistake to assume that any person with a high number of followers is, in fact, an influencer.

"Fake" influencers on any social network rely on their high number of followers to convince companies to collaborate with them, with the promise that their products will reach thousands of people.

The truth is that increasing your follower count today is as easy as online shopping. There are many, many, many sites that for a price will make your account go from a few hundred to several thousand followers almost overnight.

According to Influencer DB report, in 2019, Instagram had more than 1.4 million accounts with more than 15,000 followers. Can all of these be considered influencers?

Having a huge amount of followers isn't the same as having a community of people who engage with you and your content.

Always pay attention to an influencer's engagement rate, if there's no organic interaction, that means they're large following is useless to your brand and your campaign.

Some basic indicators to look out for are an account's handle, profile picture and follower ratio. An account with only numbers, a combination of one word followed by a long number sequence, or no actual name is usually a bot account.

Similarly, most real users will have a profile picture. If an account has no photo, that should be a red flag. Alarms should also ring if an account is following many people but has very few followers of their own.

1- Compare the number of followers with their engagement

Not every follower, even if they're an actual person, will interact with content on Instagram, but most influencers have a number of likes relative to their audience size. The engagement a content creator's posts get should correlate to the number of followers they have.

For example, an account with 50,000 followers that only gets 30 likes per post should ring your alarms. The opposite can also be true: an account with posts that have many more likes than followers is equally suspicious.

2- Look closely at the quality of the interactions

They can even get organized with other people to comment on each other's posts and give the appearance of real engagement.

To check the quality of interactions, you should take a deeper look at the comments. Bots will be quite generic with their comments and thus be easily identifiable.

Look for comments that only have a word like "excellent", "great" or just an emoji.

Another great indicator is the coherence between the publication and the commentary. For example, if the influencer makes a call to action for his followers to answer with some personal experience and the comments are monosyllabic, you'll know that something isn't right.

Unless it becomes viral from one day to the next, it's normal that any account on Instagram grows followers gradually. There are several tools available to see how an account has grown over time.

If when using them you notice that the influencer's account has peaked from one moment to another, check the profile carefully to see if there's a logical explanation for it, or if they've been buying followers. Similarly, sudden drops of followers are equal indicators that something's happening; for example, that Instagram has removed a list of false accounts at once.

Instagram regularly sweeps for false or inactive accounts and will delete them periodically. It even recently launched a new feature to help separate real from fake on the platform. The "About this account" option will tell you an account's history, including the date it was created and all usernames it's had, as well as the country it's based in and other accounts with whom it shares followers. 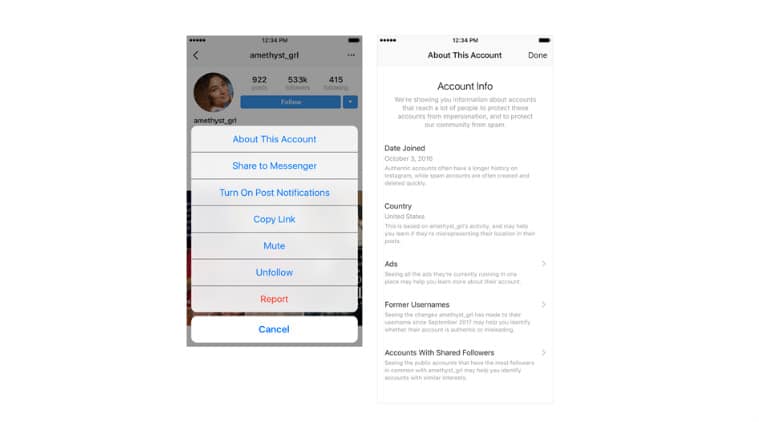 You can also rely on tools such as IG Audit or Social Blade that allow you to, among other things, verify the percentage of false followers that an account has bought.

Keep in mind that just because the prospect has any of the elements mentioned in this post doesn't mean he or she should be accused of being a phony.Remember, the problem is not that the account has bots, all accounts are prone to these fraudulent followers. It's only a problem if you notice that an influencer's audience is mainly bots.

Take these indications as a check list. And if the influencer checks most of the boxes above, they're most likely a profile with false engagement.

The first step to avoid falling into the 'fake Instagram (or other platforms) influencers trap' is to be well informed.